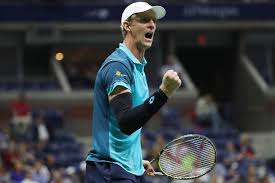 Many people have their opinions of how someone became so good on the ATP Tour and then there are those who played and saw the progression of how someone became such a great tennis player.  I am not sure if I was fortunate or unfortunate to have played Kevin Anderson five times on the ATP Tour.  I was 0-5 against him and most of those matches I felt coming off the court that I played an excellent match, but unfortunately lost.  You see, the margins in tennis are so slim at the professional level that one ball missed at a bad time will cost you the set.

I played Kevin between 2006 and 2009 in Champaign Illinois, Winnetka Illinois, Cincinnati Ohio, Louisville Kentucky, and Granby, Canada.  Of the 12 sets that we played in those five matches, six of the sets went to either 7-6 or 7-5.  In the Cincinnati Masters match, I already lost to Kevin twice so I knew what was coming at me.  At under six feet tall, the shorter player usually has a disadvantage in tiebreakers due to serving, but I won the first set tiebreaker and then lost the second set 6-2.  I looked up at the scoreboard and realized that Kevin had served 92% first serves that set.  I thought good luck breaking his serve.  In the third set, I had break point and had a high forehand to put away, I ripped it for a winner and it just hit the top of the net and did not go in.  Kevin played a couple of good return points in the third set tiebreaker and I went home unhappy again for the third time.  Later that year, I played Kevin in Louisville, Kentucky on a lightning fast indoor court.  I thought that this time I should try slicing returns to try and somehow get the point started on his serve.  It was a good match.  Kevin went back to his hotel with a smile on his face.  I lost 7-5 in the third set.  I played Kevin one more time, in Canada this time I lost 7-6, 7-5.

It is difficult playing someone serving 140 mph coming from a 6’8” frame.  Watching 20 aces go by you in a match is tough.  The basis of this article is about how Kevin evolved into one of the best tennis players on the planet.  When I played Kevin, I felt like from the baseline I was dominating him groundstroke for groundstroke.  His amazing serve kept him in the matches that we played against one another and it should be that way considering his size.  His groundstrokes were solid, but he was defensive from the baseline which is not normal for a guy his size.  In amateur tennis, meaning junior and college tennis, you can win many matches playing good solid tennis.  However, at the highest level of tennis, you have to apply pressure, hurt people with your weapons, and force the opponent into making errors due to the quality of your groundstrokes.  I always thought that if Kevin could take the ball earlier, play a bit closer to the baseline, and develop a great transition game coming towards the net, he could be an amazing player.  This is what you saw at the 2017 U.S. Open.  I have been seeing it for some years now, but it really came together at the biggest professional tennis tournament in the world.

Kevin was and obviously still is very professional about how he goes about his daily work.  I saw this from when we were playing because he was very disciplined about his profession.  Kevin is a great person and kudos to him for making the necessary adjustments and finding the right people to take his game all the way to the top of professional tennis.