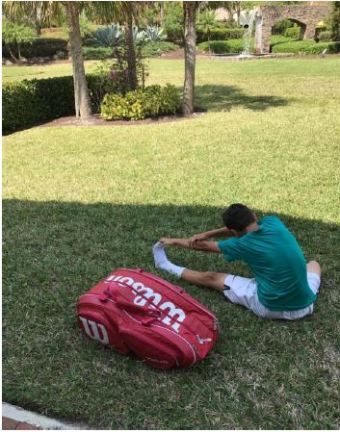 I find it quite amusing when I attend junior tennis tournaments and see the teenagers huddled around each other either socializing or trying to snap a photo to put on social media. Then all of a sudden, their name is called and they need to rush to the court to play a tennis match.  They may win or lose, but if they do not perform up to their parent’s standard that they have set for their child, it will be a rough car ride home or back to the hotel.  The “cool” kids that love tournaments so they can see their friends usually do not do well.  Their mentality and preparation is wrong.  For the serious kids, socializing is for outside the tennis facility.  When you are at the tournament, the serious kids are there to do one thing and one thing only, and that is to win.  Everything else is secondary.

For all the parents reading this article, the next time you attend a junior tennis event, just take a step back and see who is hanging around at the courts all day with no purpose. It is going to be the vast majority of kids, but also keep in mind that the vast majority of kids do not have goals and a purpose for why they play tennis.  There will be a couple of kids sprinkled around the event away from everyone else warming up properly, stretching, re-gripping their rackets, and maybe listening to music in a quiet secluded setting.  They are not around many other kids socializing and listening to all the noise around them.  These teenagers are there at this event and they have a purpose.

For many of you who have read my previous articles, you know that my tennis background was training with a couple of Argentine disciplinarian coaches who produced some of the best amateurs and professionals in the United States. I trained with these phenomenal coaches from when I was 6 years old all the way to 26 years old.  As I reflect on how I was and what went through my mind preparing for a tournament, it went something like this.  Tennis for me was a blast from day one.  I was obsessed with everything about it.  I grew up and played with the best players in the country and in the world since I was 6 years old.  I had two main coaches that truly cared for the students.  They trained you multiple hours every day.  You did not just take a lesson and then spend no time with them the following days.  They were truly there for you to produce you into a champion.  They were not running a lesson factory away from the other students.  Tennis for me was a way to better my life.  What this means is that if I could hit that tennis ball better than most, I could find a way to better my life in something I truly enjoyed doing.  I felt the love from my coaches because they knew I would run through a wall to win a point or perform the drill properly.  When there is this mutual desire by both parties to go the extra mile, there was no way I could not be a serious prepared tennis player at a tournament.  To goof off at a tournament meant to me that I did not respect what they were doing for me, and what my mother was doing for me since there were tremendous sacrifices to see how good I could be.  I was a reflection of their phenomenal teachings and I would not let them down if I could avoid it.  You see, I was striving to be a top notch amateur and then professional, but I felt that they cared so much and wanted it for me as well, so we were in this process together working our tails off.

Playing junior tennis in Florida in my generation was very difficult. The talent pool was large.  If you did not prepare well in practice or in the tournament arena for your matches, you were not going to be successful.  I would watch some of the top players and I knew that to ever beat them, things had to be done properly.  I was also a top-notch player, but I knew that if something was off, it would be a quick match and I would not win.  These players would be away from the rest of the competition at events and you know they were getting ready for a prize fight.  There was no socializing for these players.  They were there for one reason and one reason only, and that was to win.  I was not the only one trying to better my life by hitting a yellow ball better than the rest.  When I went to tournaments, I rarely stayed at the tournament hotel because for me the competition took place on the courts and I did not want to spend time or socialize with the competition outside the “boxing arena.”

In closing, if you ever wonder how you fulfill your potential in this game, it is to perform many aspects of preparation well, but to have the proper guidance so that your goals can become a reality. I am not saying that your child should not socialize, but what I am saying is that the tennis facility is there for tennis.  The socializing for the serious children is outside of the tennis facility.  It is very easy to see who these focused children are at a tennis tournament.  What many children and parents need to realize is that tennis can open countless doors and the skills they learn on the tennis court can be lifelong.  Many of these skills are not taught by studying out of a book in school.  From very early on, I had a dream of playing professionally, and I knew tennis was the one thing I was best at, so when you have those thoughts of bettering the future of your life through tennis, you are going to have to do things better than most people.  There are kids all over the globe trying to get college scholarships or make it on the ATP Tour.  What separates your child from the rest? Remember, if it were easy, everyone would do it.