The Inside Look at an Elite Amateur Tennis Player 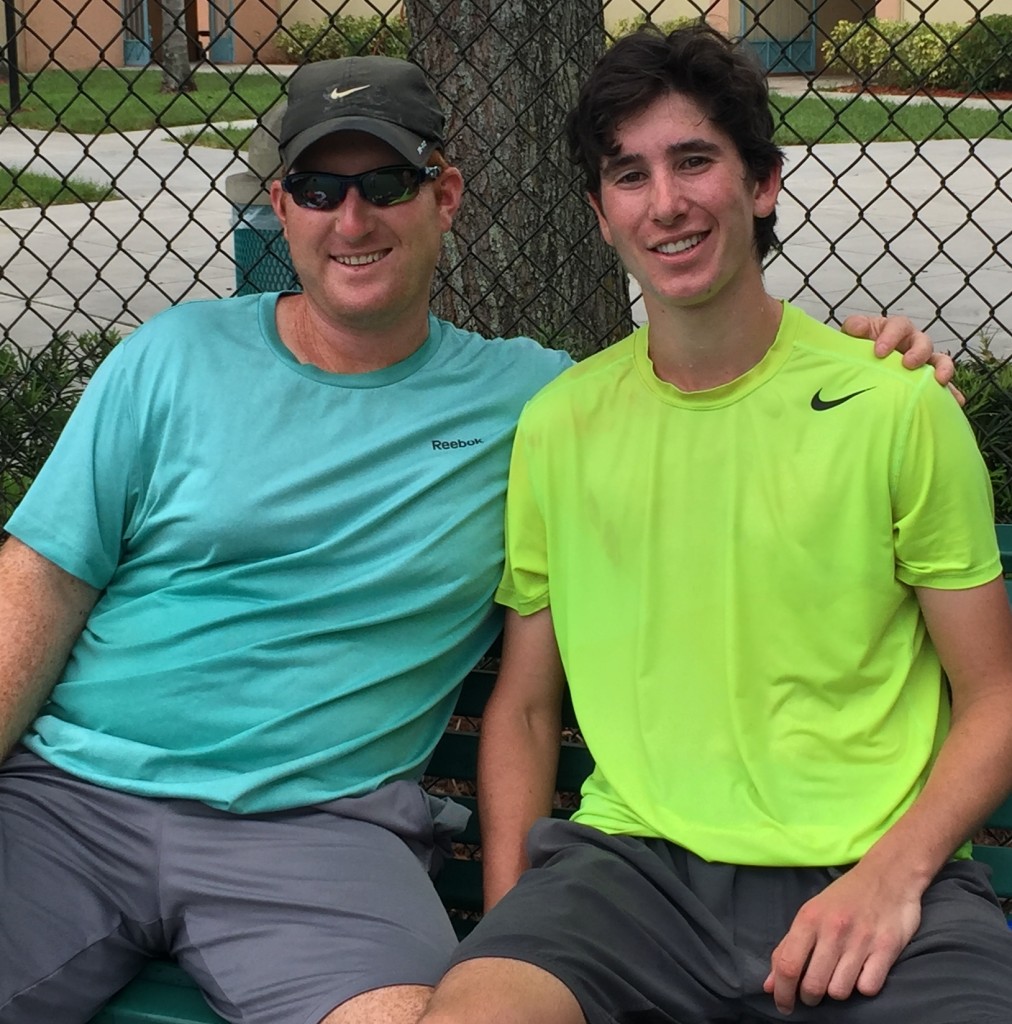 Since there is so much information on the internet about how to perfect this or that tennis technique, I thought it would be very interesting for my audience to get an inside look at what really takes place in order to be an elite amateur in the United States.

I started working with Kyle Mautner just before he started his junior year of high school.  Kyle was about to go through some changes to his game by being more physical and agressive so he could attain his goals and dreams as a tennis player.  Based on each player’s long-term goals and dreams, I then work with them set a plan on how to achieve those goals.  This is not a short-term development plan.  It is a strategic, concise, involved long term planning effort.  Everything that a young athlete does is a habit and some habits are tough to break; however, if that young person wants to achieve their goals, they need to be comfortable with being uncomfortable.

From the start, Kyle bought into the plan that I thought would progress him to much higher levels of tennis, whether it was at University of Pennsylvania or on the professional tour.  So what did we work on for five hours a day during the week plus another couple of hours on Saturdays?  Kyle was an excellent competitor, yet needed to develop weapons off both the forehand and backhand swings, learn to play more like a left-handed tennis player, develop a much better transition game to the net, develop a much bigger serve, and become much stronger physically.  Given there was only two years left for him in junior tennis and he was also going back to the Northeast to play sectional tennis tournaments,  there was a lot to accomplish in a short timeframe so that he was ready to play a very high level of college tennis.  In Kyle’s last couple of years of junior tennis, he was one of the top players in the Eastern Section winning multiple sectional tournaments and finishing with a top twenty national ranking in the boys 18 and under division.

Kyle and I had many discussions about how he was in a very special position to excel.  He got to this place due to his improvements in tennis and hard work academically.  He was going to be exposed to people and opportunities that others only dream about.

Kyle just stayed at my house for a month of training preparing for his 2016-2017 tennis season at University of Pennsylvania.

This interview is about how he handled his freshman year at school playing number one singles, as well as getting through the rigors of the Wharton School of Business.

TW: Why did you decide to pick University of Pennsylvania/Wharton School of Business?

KM: I thought the University of Pennsylvania had the perfect balance of tennis and academics, as I could attend one of the premier schools in the country.  I want to pursue a career in business after tennis so studying at the Wharton School at the University of Pennsylvania seemed like the best opportunity for me.  In terms of tennis, I loved Coach Geatz from when I first met him when I was 13.  I also thought that if I could keep developing, I would potentially have the chance to play number one singles as a freshman, which is a tremendous opportunity.

TW: What is a normal day like for you at school?

KM: A couple days during the week I go for extra training with the coaching staff at 7:00am.

I also have class at night for 3 hours a few days a week.

Team practice is from 2:00pm-4:30pm, and I also try to get out an hour early to drill with the coaches.

Team gym workouts are twice a week plus I do one extra on my own.

I study for about 3-4 hours a night and go to sleep around midnight.

KM: My fall season started very well after training in Florida over the summer.  I made the semifinals of the top flight of the Princeton Invitational and the semifinals of the regional tennis tournament, beating some of the top players in the Northeast.  The rest of the fall was a lot of preparation for the spring season.  Over Christmas break, I was back in Florida training and living with you to get ready for the spring season.

During the regular season, I beat six players ranked in the top 100 in the country including the reigning Ivy League Player of the Year, a senior at Dartmouth, 6-4 in the third set.  Some of my biggest wins were beating the number one player at Harvard, Princeton, Dartmouth, Penn State, University of New Mexico and East Tennessee State University, among others.  Some of these players were ranked around 50-80 in the country.  Unfortunately, I came down with plantar fasciitis in February, which hampered my training and I was forced to cut down on the hours spent on court.

TW: What were some of the aspects of your freshman year that caught you by surprise?

KM: I was very surprised by how tough the academics are and I realized how much my time management needed to improve.  I needed to be very disciplined so I would not fall behind due to matches and training.  I learned quickly that tennis and academics were my top priorities, so the social scene took a back seat.  The academic environment is incredibly competitive, so I do feel like tennis helped me prepare for the rigors of being a student-athlete at University of Pennsylvania.  In the fall, I was surprised to see my fellow teammates and other Ivy League players studying before and after matches and I soon realized you cannot waste any time.  Having a balanced schedule of tennis and studying throughout each day is imperative.

TW: What kind of stress or pressure did you feel not only playing number one singles on the team as a freshman, but also in the classroom?

KM: From the very first match of the year I was incredibly nervous.  I played a poor match, but I was able to win.  Over the course of the season, I became more comfortable and motivated by the fact that I was playing the best player from each team.  The team environment is incredible and it is always fun pumping each other up before each match.  In the classroom it is always a struggle (as my friends know), but I would try to make the best of my resources like having regular tutoring sessions.  Having study hall two nights a week from 8-10pm was also a big benefit.

TW: With the experience of playing some of the best players in the country, what are some of the keys to winning more matches on a consistent basis?

KM: Staying physically fit and mentally fresh is crucial.  It becomes tough playing matches every weekend in the spring and traveling throughout the country, but the key to more success is in the preparation.  I feel like the plantar fasciitis hampered me, and in hindsight, I could have taken better care of my body.  I lost a few matches that could have gone the other way, especially ones that came down to the wire in the third set.  The margins in each match are so small so you need to bring your top level every time.

When Kyle started to live with me and my family in the beginning of his junior year of high school, it became a great situation.  I was given the green light from his father from day one to train him to the best of my knowledge in order to transform his game that would work at much higher levels of tennis.  Kyle matured in many ways tennis wise, physically, and emotionally.  Due to his desire to keep improving, he put himself in a position to have a very successful life after tennis.  As I keep seeing so many tennis videos on the Internet about this or that technique, there is one thing that you cannot measure and that is brains and heart.  Kyle has always worked extremely hard and always asks me to do extra time with him.  That is how you become a much better tennis player.  You do what others are not willing to do and that comes from both player and coach.